1 a plan or drawing produced to show the look and function or workings of a building, garment, or other object before it is built or made
2 purpose, planning, or intention that exists or is thought to exist behind an action, fact, or material object

1 decide upon the look and functioning of (a building, garment, or other object), typically by making a detailed drawing of it
2 do or plan (something) with a specific purpose or intention in mind

The Wall's unveiling is later today and we're heading into the city to drop off my contribution to the project. My design got ahead of my fundraising so I'm urgently encouraging EVERYONE I'm connected to (yes, you the reader) to contribute $1 to the cause.

You can find out more about Todd's situaion on the SLR website but suffice it to say that he is the producer of outdoor enthusiast shows and is the victim of a traumatic brain injury after a piece of equipment fell on him during the tear down phase of the show. I caught a Tweet by Laughing Squid that artists were coming together to raise money for his recovery. Due to an error there is no insurance coverage for Todd's accident and thus his colleagues, friends and family are rallying around him to raise funds for his rehabilitation.

I don't know Todd but if I were the victim of such a life altering injury I surely would want humanity to rally around my recovery. So I'm contributing.

The Wall is a collective kinetic sculpture consisting of a series of artistically enhanced gears. The idea is that once Todd's recovery is complete he will be able to crank the gears. Each artist has committed to raise $500 for their gear contribution. Below you can follow along the creative process of my gear's birth.

In an earlier post I shared a photo of the raw gear: 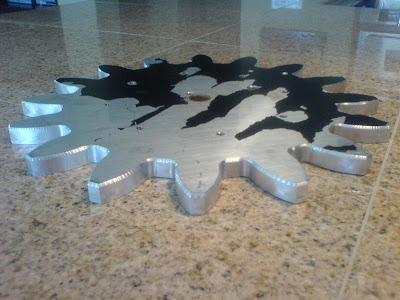 As you can see, the gear consists of an aluminum gear with pre-drilled and threaded holes. Thus to make the gear three-dimensional, one can insert threaded rod into the holes. Here I am at the hardware store picking out threaded rod: 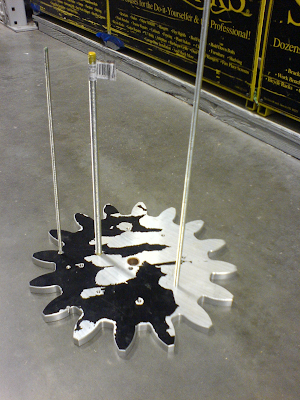 The question then became, "What should the rods support?"

I wanted my design to represent Todd, his recovery and the means by which support was rallying around his cause. No small order with such a small gear and a maximum depth of 12" that 3-dimensional objects can protrude from the gear. I was also unsure how much space I could protrude out to the sides of the gear so I played it safe and kept the design within the width of the gear.

Unfortunately I wasn't able to bring integrity back to my studio before beginning this project (aftermath of the Hidden Bog Garden): 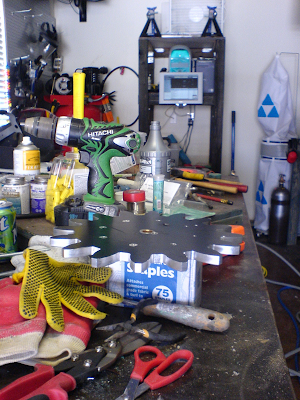 The first step was to attach "Todd" to the gear: 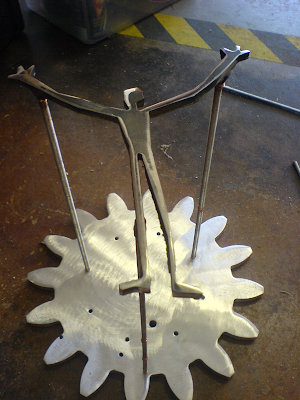 I then welded the following metaphorical objects to the rods: 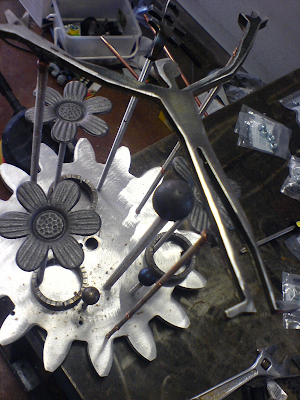 I was now ready to add color to the piece. My daughter Téa stayed up in the studio with me and acted as my color consultant for the various pieces of the sculpture: 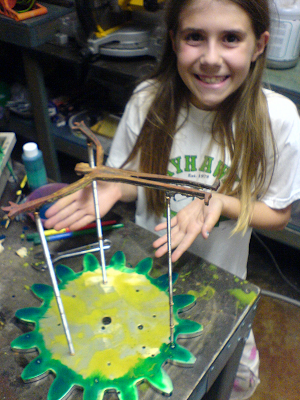 I'm very pleased with the color of "Todd" which is designed to change over time. Represented here is the "pre" evolution of the color in which it will be introduced to the kinetic sculpture today. However, by design, I have infused a highly corrosive acid into the pores of the metal to create this affect. Over time, the acid will continue to eat away at the steel and produce a deep, mottled rust. The rust that erupts from "Todd" represents the sickness within him that will leave his Body. 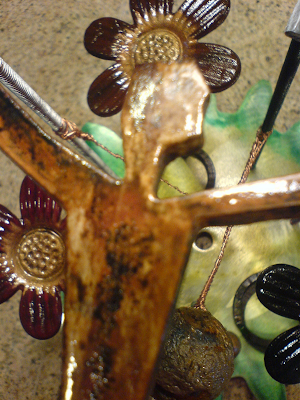 The three spheres, representing Todd's Body, Spirit and Mind, represent Todd in a completely healed state with his Body (rising higher than the Spirit and the Mind) in a state of complete health: 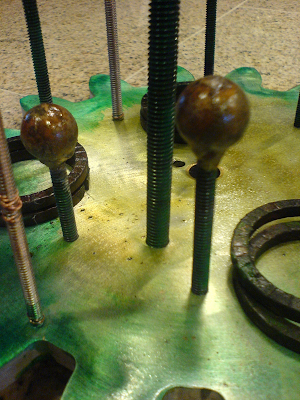 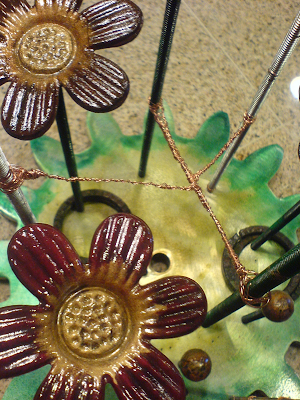 And thus we have the completed sculpture which will be added to the kinetic sculpture in San Francisco this afternoon: 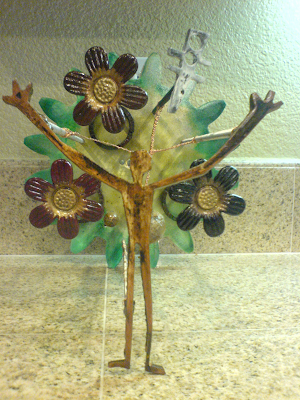 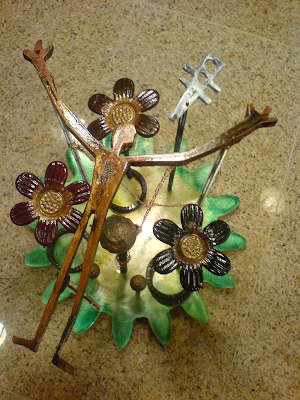 Ready to donate?
I collect with vodpod 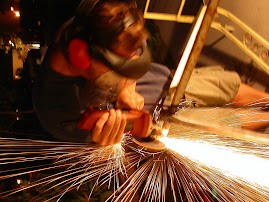